skip to main | skip to sidebar

Our letter, those by others, appear above the essay that instigated them. Ours in particular demonstrates that, as an editor ourself, we know how to get a letter published: Flatter the editor of the page, and obliquely disparage his or her right-wing, corporate-toady ass-kissing colleagues across the fold on the editorial page, and the overlords at the top of the masthead. (Note: We didn't write the "Independence Dies ..." headline; they did!)

Independence Dies When a Newspaper Owner Has One Goal—Profit
July 19, 2007; Page A13

Jim Prevor's editorial-page commentary "The Roots of Editorial 'Independence'," July 10, begins with a good premise but draws a conclusion that does not follow. Editorial independence may, in large degree, stem from an editor's willingness to be fired. However, that a publication's owner is for some reason the best guarantor of that independence is a non sequitur. That an owner would hold a publication's credibility uppermost would be the ideal case, from the point of view of editors and most readers.

However, clearly, an owner or publisher considers many things beyond editorial integrity and excellence in his or her decision-making: Currying favor with or not alienating readers, advertisers or policymakers are typically factors that carry weight with owners more than with editors. Whether a board of some kind to insulate editors from the whims, biases or self-interest of an owner is the best solution for Dow Jones, I do not profess to know. But in the specific case of Rupert Murdoch's prospective ownership of the company and of The Wall Street Journal, it seems it is precisely being fired (or interfered with) by him that Journal editors, the Bancroft family, and many members of the public who appreciate the Journal's excellent news coverage if not always its editorial page stances, rightly fear.

Jim Prevor's commentary is a naïve view of the media business and Rupert Murdoch that one can only hope the Bancrofts do not share. He is correct in his assertion that a board designated to protect editorial independence will not work, but his reasoning is seriously flawed.

Reading the New York Post's Page 6 or the The Sun's Page 3 demonstrates the importance of "editorial integrity" to Rupert Murdoch. News Corp. has one goal: profit. There is, of course, nothing wrong with this, but let us not kid ourselves into believing that editorial integrity is what sells newspapers.

The Bancrofts must decide to either sell the business and recognize that they will have no say in what goes on at Dow Jones, or keep control of Dow Jones and maintain its editorial reputation. Neither decision is necessarily better than the other, but it is disingenuous to act as if there is any middle ground.

Mr. Prevor's throw-away reference to the tenure of Henry Ford II at the Ford Foundation does a disservice both to Henry II and to the enormous impact he had on the institution his father founded.

Henry II served on the foundation's Board of Trustees for 33 years, both as chairman and president. One of his many great acts of leadership was commissioning a blue-ribbon panel to determine how best the organization could use it vast resources to fulfill its charter. He did this in 1950, already seven years at the helm. The goals he and his fellow trustees unanimously embraced -- reducing poverty, promoting democratic values, striving for peace and building knowledge and understanding -- cleave closely to his father's original vision and remain at the heart of the foundation's mission.

While Henry Ford II did offer incisive, constructive criticism of the foundation at the time he retired in 1977, he also heaped it with praise. "The Foundation already has a magnificent record of achievement," he said. "I'm confident that it is capable of still more significant contributions to the world in the years to come. . . . The future of the foundation is in capable hands."

The Roots of Editorial 'Independence'

The controversy over the possible sale of Dow Jones and particularly The Wall Street Journal to Rupert Murdoch's News Corp. may be predictable, and the efforts of the Bancroft family to maintain the editorial integrity of the publication may be laudable. Yet the complicated negotiations to create a board that would secure editorial independence are a mistake. They misinterpret the nature of editorial independence and miss the point that the owner of a publication is the person most likely to defend its editorial integrity.

Editorial independence is always a function of one thing and one thing only: an editor's willingness to be fired. In his autobiographical book "Making It," Norman Podhoretz, the long-time editor of Commentary magazine, reflected on how he could both have independence as an editor, yet work for a magazine owned by the American Jewish Committee, which had decided interests and opinions:

"The editorial independence which the American Jewish Committee had always granted to Commentary consisted simply in this: no person except the editor or anyone he might voluntarily wish to consult could read articles in advance of publication or could dictate what should or should not appear in the magazine . . . The editor of Commentary, like any chief executive of any operation owned by others, only had as much freedom -- which is to say power -- as he was willing to risk exercising. If he did something he thought right and of which the AJC then disapproved, it was not enough merely to defend himself and hold firmly to his ground; he also had to make certain that he would not be deterred in the future by the fear of similar trouble from taking an action which he believed to be in the best interests of the magazine. There was only one way I or anyone else could be faithful to this principle: I had to be ready at any moment to lose my job. The AJC could fire me at its pleasure; that was its protection against me. My protection against it was my willingness to get fired; the minute I lost that willingness, I would lose my freedom and consequently my power to do the best editorial job I was capable of doing."

All of the mechanisms being discussed as possible ways to maintain editorial independence for The Wall Street Journal in a possible post-Bancroft era are designed to evade this fundamental fact: If the editor in chief of a publication is not willing to lose his job, he will always operate in a manner designed to please those who can assure his employment. The only thing that elaborate mechanisms such as independent committees to hire and fire chief editors, etc., will achieve is changing the names of the people to whom the editor will be subservient.

Now, some would say that Rupert Murdoch is some kind of uniquely sinister force in journalism and they would, in fact, be pleased to see a system set up to make sure that anyone other than him makes the important editorial decisions. Yet the incentive system is such that the owner of a publication, in this case presumptively Rupert Murdoch and News Corp., is the one with the greatest incentive to maintain the publication's reputation.

Readers turn to publications for information and insight on various subjects. If a publication is taken over and is losing money, as in the case of News Corp.'s purchase of the New York Post, the owner may look to change editorial approaches because the old one was not a component of a successful business model. But what is the alternative? Allow an independent board to dictate an editorial approach that does not attract readership and leads to bankruptcy?

A large, reputable and profitable company such as Dow Jones offers a very different set of risks and rewards to an owner. Any attempts to utilize the publication for personal benefit by, for example, talking up friends and attacking enemies, would be greeted with resignations by top editors who refuse to prostitute the editorial content in that way.

These resignations would be widely reported, and the word would quickly get out that readers are being fed propaganda, not news and analysis. This loss of reputation leads to a loss of readership and imposes on the owners an enormous loss of value. So ownership, though perhaps tempted to use editorial coverage to its advantage, has powerful incentives not to do so.

On the other hand, independent, self-perpetuating committees have nothing to lose and so they are not restrained in their actions. Typically, this means the publication will become a bore because the members of the independent board will look to appoint people who are admired by their friends and represent the mainstream viewpoint of their social class.

We should expect that a self-perpetuating board would eventually stray very far from what its founders intended. A good example is the board of directors at major foundations. Henry Ford II felt compelled to resign in disgust from the Ford Foundation explaining that: "In effect, the Foundation is a creature of capitalism, a statement that, I'm sure, would be shocking to many professional staff people in the field of philanthropy. It is hard to discern recognition of this fact in anything the Foundation does. It is even more difficult to find an understanding of this in many of the institutions, particularly the universities, that are the beneficiaries of the Foundation's grant programs."

Publications do not edit themselves, so editors must be hired, and they are always answerable to somebody. Even if the editor happens to own the publication, he is only free to act as he chooses to the extent he is indifferent to the effects of those actions on subscriptions, readership and advertising.

Setting up self-perpetuating boards only serves to switch the names of those the editor is answerable to. A board with a lack of interest in the business success of a publication is unlikely to lead to successful and thus greatly important and influential publications.

This whole exercise of trying to ensure editorial independence is somewhat insulting to the editors of Dow Jones publications, now and in the future, as it implies that they are so desperate for employment that they need to be protected against a demanding or opinionated boss.

Great publications always come from editors on fire with ideas and with a vision for their publication. Their independence comes always and simply from their willingness to be fired. No committee can change that truth.

Mr. Prevor is founder and editor in chief of Phoenix Media Network, Inc.

News for Phoenix's Historic Neighborhoods ... and beyond! 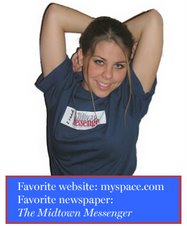 Other sites of interest

David Tell
[David Tell, editor and publisher] For more than 20 years, David has created and managed publications of all sorts. Restless to run his own publishing operation and make a positive difference in the community in which he lives, David created The Midtown Messenger in October 2001, adopting the successful model of reporting essential local news, covering matters affecting neighborhood residents in midtown Phoenix. Over 10,000 copies are distributed free to the doorstep throughout Midtown's neighborhoods each month, plus the hundreds welcomed at Phoenix City Hall, the State Legislature, and dozens of cultural and commercial establishments. E-mail David at editor@midtownmessenger.com. 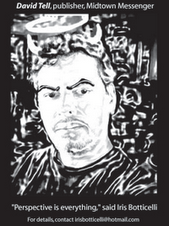